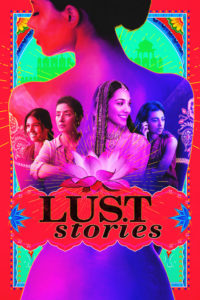 An anthology of four stories that sheds light on modern relationships from the viewpoint of the Indian woman.

Kalindi (Radhika Apte), a college professor, engages in sexual intercourse with a student of hers named Tejas (Akash Thosar). The morning after, she reassures herself that it was only a one-time occurrence but later stresses over the power dynamic of a student-teacher relationship. Multiple scenes are woven throughout the segment which depict Kalindi speaking to someone off-screen, in the fashion of an interview. During these cuts, she reveals that she is married to a man named Mihir, who is 12 years older than her and remains a close confidante. Inspired by his adventurous stories of love and numerous short-term relationships, Kalindi is also on a mission to explore her own sexuality. She begins dating her colleague Neeraj (Randeep Jha), but breaks up with him due to his firm belief in monogamy and his sexual awkwardness. She realizes that Tejas is beginning a relationship with his classmate Natasha (Ridhi Khakhar), which Tejas vehemently denies. To get him to confess, Kalindi obsessively stalks the couple, behaves rudely towards Natasha, and even breaks in to Tejas's room to search for evidence. Finally, in her exasperation, Kalindi relays to Tejas that she was interested in him and that she wishes him luck with Natasha. Tejas tells her that he was unaware of her feelings and is willing to leave Natasha for her, to which Kalindi replies that she is already married, leaving Tejas overwhelmed.

Sudhaa (Bhumi Pednekar) and Ajit (Neil Bhoopalam) are secretly in a passionate sexual relationship. It is revealed that Sudha is his maid, who arrives daily to clean his bachelor apartment. Ajit's parents arrive to stay for some time, during which Sudha is shown to diligently work for the family, despite earning only ignorance from Ajit. One day, a family arrives with their daughter for a marriage proposal and Sudha is silently heartbroken. As she prepares food, she watches the two families finalize the marriage and discuss the futures of their children. Sudha serves them tea and finds Ajit romancing his bride-to-be in his room. She appears to be desolate as Ajit's mother distributes sweets and congratulates her. Sudha slowly eats a piece of the sweets and resuming her normal routine, is shown to leave the apartment after yet another day of work.

Reena (Manisha Koirala), a housewife, is in an extra-marital affair with her husband's close friend Sudhir (Jaideep Ahlawat). The two are in love and have maintained their secret relationship for 3 years. During one of Reena's visits to Sudhir's home, Salman (Sanjay Kapoor) relays to Sudhir that he suspects Reena is cheating on him. This causes Sudhir and Reena to panic, especially when Salman arrives at Sudhir's home. Reena reveals to him that she is unhappy in their marriage, due to Salman wanting a mother for his children, not a wife. After she reveals her affair of 3 years with Sudhir, Salman breaks down and asks her to stay for the sake of their children. Later that night, the couple bond and make love whilst Reena is grief-stricken. The next morning, she tells Sudhir that she cannot meet him again and leaves with her husband.