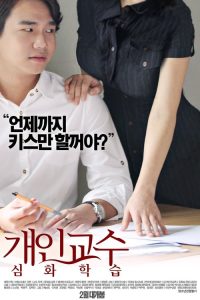 The woman next door; she became my exclusive special tutor. “I’ll teach you the real skills to excite women!”

Seong-jin, the so-called expert of theory, who learned about women through text only, feels the thrilling excitement whenever he sees his academic advisor professor, Mi-ae. However, Mi-ae keeps ignoring his courtship, telling him to come back after growing up. He felt stuck and helpless and ends up revealing his distress to Yeon-hwa, a novelist who has recently moved next door. To his surprise, she says she will teach him about women and begins tutoring him with the real life lessons from kissing to sex.

The novelist chick next door becomes the student's sex teacher. At 53:24, the student comes to her house to have a drink with her and finds her boyfriend also visiting her. So he has a drink with the couple instead of just her. When the boyfriend goes to the convenience store to buy more drinks, he fucks the novelist on top of the table where they're having their drinks.

The professor whom the student is lusting on also has a boyfriend, however, she is in the process of breaking up with him on the night that she fucks her student. At 1:13:14, she tells her boyfriend on the phone that their relationship is over before she initiates sex with the student.