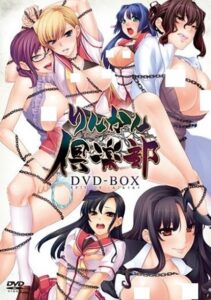 The main character is a senior who attends Rinin High School; the only school among the mountain town of Rinin City. The main character, who is the student president of the high school, has another hidden persona. The persona as head of the “Gang Rape Club”...

A dark ceremony existed that had been handed down for thousands of years in the old town of Rinin; the name of the ceremony, in particular, in the oldest of records. That ceremony, enacted to protect the region from disease and crop failure as a curse from the region's guardian deity, Hime Iwanaga, occurs in the evenings between the new moon and full moon, in which a maiden is disguised as Konohanasakuyabime and gangraped to appease Hime Iwanaga's anger. In regards to the maiden, there must be an important man participating in the gang rape, in other words, that man must be related in blood to their wife or lover, mother or daughter, younger sister or older sister, and the like, and after the gang rape, if a pregnancy occurs, Hime Iwanaga's anger is abated, and a good harvest and safety upon the region will be promised. However, if a pregnancy does not occur for the sake of suppressing Hime Iwanaga's anger, the maiden is supposed to be covered with semen, and floated down the river alive, as a sacrifice.

And now---After the Tashio era, the ceremony itself had vanished into the dark history, but had still continued on at Rinin High School; the cruel, improper traditions being inherited over into a secret society through actions carried out by the Gang Rape Club. For generations, the student president of the High School has served as the head of the Gang Rape Club, not allowing even one day to pass uneventfully, submerging numerous women to the dark, suffocating pleasure.

All 1-4 Episodes via Spankbang

This anime is horrible. It makes you só angry that after you watch this you want to travel to Japan, just to kill the guys who made this anime, especially the writer.

The story is about a club called “Rinkan Club” which gang rapes girls during full moon in “respect” to a millenial-old tradition. For just that it'll make you angry, if you have the minimum sense of equal rights, morality and respect for human beings, but there's more.

The women raped in this anime are: A teacher who has a boyfriend in the big city, who wants to destroy the “Rinkan club”; a doctor, who is a loyal wife and a dedicated mother; the most popular girl in the high school and others high school girls who are very cute, by the way.

Now you ask me why? Why are these girls raped? There must have a reason for this, they probably are snobs, who hang out just with the hot shots of the high school or college, right?

Well, actually the answer is no! They are rapped just because, according to the town's tradition, a girl in ancient times was rejected by a prince (or something like this) because she was ugly and her sister was chosen by the prince to be his wife (I'm not sure about the story, but basically it went like that). As revenge, the ugly girl decides to start a “ritual” during a full moon, which consists of gang-raping beautiful girls, starting with her sister, the beautiful one.

That's the reason the girls are rapped and if they don't get rapped the spirit of the ugly girl will rage over the town and destroy everything or something like this.

So, basically, the girls are rapped because they are too beautiful. Oh! How can somebody be too beautiful nowadays? Of course, they deserve to be rapped! Let's not blame DNA or God's choice, let's punish these beautiful girls! (Note the sarcasm here)

The first one to get raped is the teacher, a woman who just graduated in Tokyo and came back to her city to stay with her mother (who is sick) and to ruin the “Rinkan club”, but in just a few weeks, the leader of the “Rinkan club”, a very beautiful high school girl, who is her student, makes a plan to rape her.

The leader of the “Rinkan club” traveled to Tokyo, just to make the teacher's boyfriend write her name on a piece of paper (A girl can't be raped if her name was not written on the piece of paper by one of her relatives) and at that time the teacher is raped until she becomes a sex slave.

But even though she is a sex slave, she struggles and refuses her state and now here comes a part that will make you angry: she supposedly can't be raped if it's not full moon, but the guys of the club keep raping her without the consent of the leader.

The next victim is a doctor, who is a dedicated mother and a loyal wife and she is raped, because her son was caught stealing and to not be denounced he writes his mother's name on the piece of paper. So she's raped, but she refuses to show them that she gets pleasured until the last moment, when she admits that she likes being raped, which makes you very angry.

That's the first episode, but the second is even worst.

They start raping an innocent and very popular girl in the high school with a baseball bat and the doctor becomes a prostitute. She sells her body for just 1000 yen, it's like 10 dollars. She is not just a sex slave, but a nymphomaniac, ignoring her family and having sex with a bunch of guys in a public pool in front of her daughter!

This makes me feel só angry that I wanted to enter this anime and kill all those girls who were rapping a dedicated mom and broke her bones, one by one, and then steal a bike and live a happy life in France with her daughter.

I don't know... Maybe I just don't like this stuff of cheating husbands, ignoring kids, and putting family in the trash.

But it gets worse when the virgin girl from the beginning of the episode is raped in front of her boyfriend and shit while her anus is filled with the sperm of her rapists.

And in the third episode, you expect something good to happen, like the doctor receiving a proper punishment from her husband and her daughters and the “Rinkan Club” finally being destroyed, but this won't happen. Not in this horrible anime.

The doctor's eldest daughter offers herself as the next sex slave, just to save her mother, who is sent to a hospital in another city by her family, to be protected. The doctor went crazy and she doesn't remember anything since she was first raped.

But her eldest daughter, a young married woman (again, the anime comes with this stupid fetish about married women cheating on their husbands) who teaches in the school begins to get raped. Fortunately she doesn't likes this and she resists for a whole month, but in the meantime she is raped só many times, by só many men that she can barely stand up and at the end of the episode, those bastards from the “Rinkan Club” call her husband to see what's left of his wife: A poor and weak woman, who starts to walk for her husband, apologizing, while a monstrous dildo is getting out of her anus and finally she falls on the floor, pooping (Again the anime comes with a stupid, horrible, ridiculous fetish involving poop and piss).

This is beyond disgusting.

But at least, she comes back to her husband and they can start over in a new city like her mother did.

However, this anime cannot have a happy ending, with everyone starting a new life, they have to do something to make you angry as fuck!

In the middle of the episode 2, the leader of the “Rinkan club” kisses the younger daughter of the doctor, revealing that they are lesbian, very cute by the way.

But at the end of the third episode the youngest daughter of the doctor offers herself as a sex slave, just to impress her girlfriend, the leader of the “Rinkan club”, but she is no longer the leader. The leader is not revealed, but he talks and he's a man.

So, at the end of the third episode, it is revealed that this anime is all about sexism and disrespect for the family.

Conclusion: This is a horrible sexist anime about gang rape for a stupid ritual that everybody must respect or the town will be destroyed. Accept my advice, don't watch this anime. You'll not sleep for weeks after this.