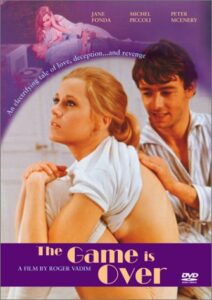 Loveplay is a woman's life until the game is over...

Renee Saccard is a pampered, selfish young wife of a middle-aged Parisian businessman who falls in love with her stepson but is driven to the point of madness when her husband tricks the stepson into betraying her.

In Paris, Maxime visits his wealthy industrialist father Alexandre and his beautiful young Canadian wife, Renée. Alexandre fathered him years ago in a prior marriage and he has come to stay with them after studying in England. Renée tells Maxime that she married Alexandre when she was pregnant following an unhappy love affair; the child was stillborn and the passion between the two has faded. Renée and Maxime begin an affair and fall in love with each other. Renée, who came from a wealthy family, asks Alexandre for a divorce. He agrees, on the condition that she leaves the fortune she brought to their marriage invested in his business. Renée accepts this and goes to Switzerland for a divorce. But while she is away, Alexandre confronts his son with two alternatives: he can either run off with now penniless Renée or become engaged to Anne, the daughter of a wealthy banker whose support Alexandre needs for his business. Maxime agrees on the second course of action. Renée returns from Switzerland to find Alexandre holding a ball celebrating Maxime's engagement to Anne. Renée throws herself into the pool to kill herself - but then changes her mind and dripping wet enters the party. Alexandre escorts her to the gymnasium, where she sits and stares into an empty future.

15:30 Stepson enters stepmom's room, donning a Chinese traditional costume, and plays with her. She's in her panties. He chases her around the room, and it ends with them fucking.