Joe, a rootless young drifter, finds work on a barge traveling between Glasgow and Edinburgh, owned by Les and his wife Ella. One afternoon they discover the corpse of a young woman floating in the water. Accident? Suicide? Murder? As the police investigate and suspect is arrested, we discover that Joe knows more than he is letting on. Gradually we learn of Joe’s past relationship with the dead woman. Meanwhile, an unspoken attraction develops between Joe and Ella, heightening the claustrophobic tensions in the confined space of the barge.

Joe (Ewan McGregor) is having breakfast with the couple and their kid inside the barge. He looks lustfully at the exposed skin of the wife, Ella (Tilda Swinton). Under the table, he lifts the bottom part of his pants and slowly makes his leg touch with the wife’s bare leg and rubs it against hers. The wife doesn’t react. He pushes his luck by touching her leg. This time, the wife looks at him intensely, but she does not make a scene. Joe makes his hand crawl to reach inside the wife’s underwear but before he can get into her crotch, she removes his hand using her own and stands up. Her husband is clueless at what happened.

Joe and the husband go into a pub in the town. Joe excuses himself early so that he can go back and screw the wife in the barge. When he arrives, he tells the wife that her husband will not arrive for at least an hour. He starts touching her, she says they’ll wake the boy. He suggests that they go outside the barge, so they did. They walk in a pathway and stops a few distance away from the barge. Joe starts undressing the wife, lays her down on a mound, and bangs her. They go back to the barge after they’re done. The husband comes back and comments on how the two are too bloody quiet. The wife responds fast with her usual nagging tone towards him.

The husband, his kid and Joe go to a fair alongside the river. Joe excuses himself early again so that he can screw the wife back in the barge. The wife refuses at first but eventually gives in.This time she cries while he pounds her because of remorse.

One day, Joe and the wife kiss passionately inside the barge while the clueless husband and the couple’s kid is outside.

On another day, the wife reaches for Joe’s cock under the sheets while he is lying down, while the husband is also lying down in the other bed. Only a thin wall is separating the two beds, and the door is wide open. Joe laughs while the husband coughs and is totally clueless at what his wife just did.

The husband goes to town to drink in a pub again, so Joe and the wife screws again. The wife is getting bolder this time and opts to do a second round even if Joe tells her that her husband is about to arrive. They fall asleep and is woken up by the footsteps of the husband pacing back and forth up in the deck. They assume that he arrived earlier and found them lying naked in bed together. Joe comes up and talks to the husband. After a heated argument, the cuckolded husband volunteers to leave instead of Joe.

Later, the wife’s sister becomes a widow and stays with them in the barge. Joe also screws her.

Joe later leaves and pays lodging in a couple’s home. He also screws the wife when the husband goes to work. A real wife fucker, that Joe. 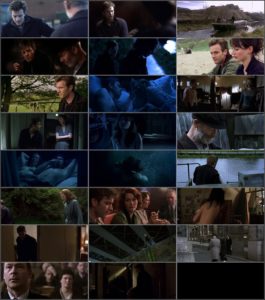