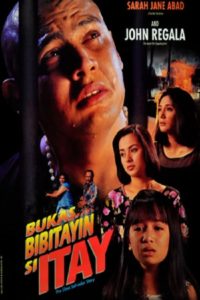 Elmo is an ex-convict who swears on his mother’s remains to live uprightly. After his life in prison, Elmo makes sure to avoid any conflict despite the mistreatment he receives from people. His wife Cathy seems discontent with the meager money her husband makes. Until one time, Cathy finds fancy to Arthur, a rich arrogant brother of their town’s mayor. One day, Elmo catches Arthur abusing his Cathy in their house. He beats up Arthur but the people on the neighborhood stops Elmo from killing him. Arthur escapes from Elmo. However Arthur is murdered by his battered wife Sylvia. Because of Arthur’s brutal death, people wrongly accused Elmo as the killer. Elmo then is sent back to the prison and was sentenced to death. Will Elmo learn to defend himself and fight for justice? 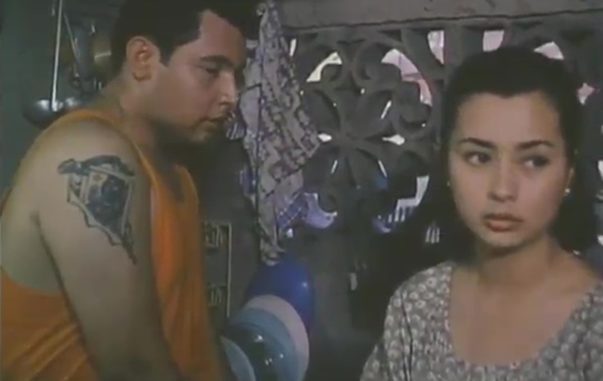 Jerk meets wife and her husband for the first time

While driving his jeepney with his pretty wife, Cathy, Elmo gets into a traffic altercation with Arthur, a rich, arrogant guy whose brother is the town mayor. Arthur points a gun at Elmo and insults him in front of his wife. He says she's too pretty to be with him and deserves better. He tells Elmo that he'll give him a pass because his wife is beautiful. Cathy is disappointed that her husband did not fight back. She has also probably started getting attracted to Arthur at this point because of his display of machismo, which is in contrast to her husband who did not display any.

Jerk gets touchy with wife's body

Cathy attends her godson's birthday party. Arthur is there and also a godfather.  He starts hitting on her again as soon as they are introduced. He also continues insulting her husband while complimenting her, asking her how a pretty and sexy woman like her ended up with a mere jeepney driver like him. She seems a bit uncomfortable but doesn't look too offended, probably because of her brewing interest at this rich, jerk-type guy who is paying attention to her.

Arthur lets Cathy sit on the mahjong table and teaches her how to play the game. The other players around them give them looks and some are smirking, indicating that they know how Arthur is with pretty women (a player) and what he is doing to one now (hitting on her). Arthur touches and caresses Cathy's hands on the table when she shuffles the mahjong tiles. A little bit later, when Cathy is winning and getting more comfortable with Arthur, he is even able to put his hand on top of her leg and rub it for a considerable amount of time and also put his arm around her shoulders. I mean, in the real world, or in a semi-conservative country like the Philippines, a woman's leg is surely considered as a private part of her body already as far as touching is concerned.  Sure, Cathy's dress lies between her naked leg and Arthur's hand, but if her husband will see them right now, I'm sure he will have something to say or do about it.

Jerk does wife favors and woos her

Cathy comes across Arthur in the city hall and he helps her in hastening the processing of her documents.

Arthur comes to Cathy's home and delivers her documents personally. He also gives her daughter a bar of chocolate, just part of his plan of accumulating points to earn our hot wife's approval. She offers him a drink and asks what he wants. He tells her, "Coffee will do, dear." with the word 'dear' indicating that he's flirting with her. She smiles at him in a way that lets him know that she knows he's flirting and is allowing it.

Arthur comes back again later, bringing another gift for Cathy's daughter and flirting more with her. She, again, accepts his flirtations but aside from her receptive smiles, doesn't really openly flirt with him.

When a goon collects 'tax' from Elmo in the streets, Arthur comes by and tells him to give Elmo a pass from now on. The goon smirks and tells Elmo, "It looks like he's into your wife. I'd lock her if I were you."

Jerk shames husband by throwing a lavish party for his daughter

It's the couple's daughter's birthday. When Elmo comes home with a gift for his daughter, he doesn't find her and his wife at home. It turns out that Arthur has held a party for them at a restaurant. Elmo comes to the restaurant and creates a scene, tells his wife and daughter to come home with him. Cathy and Arthur try to talk him out of it. Cathy even insults him, even if unintentionally, and tells him that their daughter should get to experience things that he couldn't afford to give her. Arthur also tells him that he's being rude. Lol.

The couple fights back at their home. Cathy defends Arthur, tells Elmo that there's nothing wrong with all the kindness that he's showing to them, that he has no hidden agenda. You might say she's being naive at this point, but past forward a couple of scenes into the movie tells us she really isn't.

Cathy, along with her daughter, gives Arthur a call from a payphone. She apologizes for her husband's behavior. He tells her to come to his resthouse so that he can give her daughter his gift that he wasn't able to give during her birthday.

At the resthouse, Cathy and Arthur talk in the balcony while her daughter swims at the pool below. Arthur goes into a dramatic talk so that he can soften and reel in our hotwife. It works. Cathy gives him this look that signals to him that she is ready to be kissed and ready to give him comfort for his "sufferings". They make out in the balcony. Then, they transfer to the bedroom and have sex. Their sex scene is all shoulders and headshots, unfortunately, but it's nice to see our cute wife pet and make out heavily with her lover and she even goes on top of him and rides him at one point.

Cathy's daughter, meanwhile, sees her mom disappear from the balcony and wonders where she went. Arthur's goon tells her not to worry about her and to just continue swimming.

Arthur's battered wife gives Cathy a visit and confronts her about her affair with her husband. She slaps her, etc. It has an effect on Cathy and she decides to discontinue her affair with Arthur. So when Arthur comes to visit her, looking for another sexy time with her, she refuses him. so he starts forcing himself onto her. Elmo arrives while Arthur is forcing himself on Cathy. The two men fight. Arthur loses and gets beaten up.

Elmo immediately forgives Cathy at the intervention of some old guy. I guess he really loves his wife, doesn't wanna lose her, and has accepted the fact that, because of her desirability, things like this can easily happen.

The wife's a real cutie and you can see that from the screenshots, right? She seems to be hiding a nice, tight figure under her clothes and I would have loved to see that.