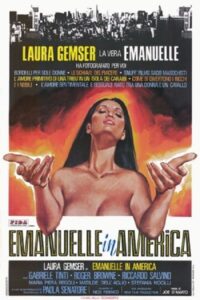 An American journalist travels throughout the world in search of a good story by joining a modern-day harem and traveling to Venice to see what really goes on at diplomatic parties. While trying to expose a corrupt government official, Emanuelle stumbles upon a group that uses kidnapped girls to make and sell snuff films.

Emanuelle (Laura Gemser) has a boyfriend and she is living with him (he's the one at 7:40), but she has sex with several men in the movie.