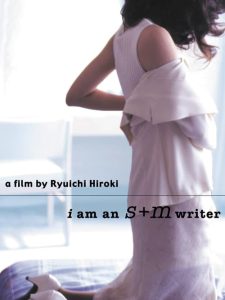 The wife begins an affair with her husband's editor. We don't actually see her lovemaking with the editor, only the initial part of their hotel room meetings where he makes her assume the doggy position on the bed (56:40) or he ties her and lifts her kimono up to expose her butt (end part of the movie).

While the editor is describing his tryst with the novelist's wife, we see her pleasuring herself in the bathtub. The combination is quite sexy.

The husband explodes in the middle of the editor's confession but manages to make himself calm and let the editor continue. After that, he finds inspiration in it and tells the editor what he should make his wife do the next time they meet for sex and to record it (audio only) for him to listen to later and draw inspiration from (56:40).

At 53:09, we see the wife make out with a female bartender (the model that her husband hired) in front of the editor in a bar. The look she gives the editor (or us, since she's looking straight toward the camera) before and after she kisses the bartender is sexy.

Earlier in the movie, the wife brings a hunky American English teacher over to make the husband jealous. Nothing much comes out of it, I think she didn't have an affair with the guy. However, she kisses him in a bar, in front of her husband and the editor at 1:08:23. It's the editor who gets jealous and gets into a fistfight with the American. After the commotion, the wife and her husband make out and pet in the bar's toilet room.