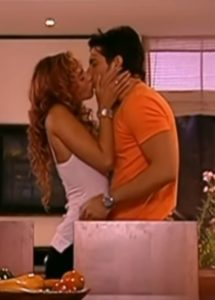 A wife meets her attractive neighbor while her husband is on a business trip.

A wife meets her attractive neighbor while her husband is on a business trip. She fantasizes having sex with him in the shower. When her dog bits him, she gives him first aid, which leads to inviting him to teach her how to cook and then have dinner after that. She picks a sultry dress for the evening, showing how she's already planning to seduce and get fucked by her hot neighbor.

The neighbor teaches her how to cook. At one point, he is standing behind her, with his body pressed against hers and his hands wrapped around her waist while he chops some ingredients. She takes advantage of it and gets aroused, but her neighbor is all business-like, seemingly very loyal to his wife and does not even think of other girls at this point.

They eat dinner after that. The wife amps up her seduction by changing into a sexy white lingerie and displaying it in front of her neighbor with her robe fully open, but he is too busy talking to his wife on the phone to notice. So nothing happens during that evening.

Frustrated that she is rejected by a guy that she wants to cheat with, the wife packs up and goes to her husband's hotel to surprise him. Instead, she sees him with another chick. She takes a photo of them for evidence but she does not create a scene and does not inform her husband of her presence.

She goes back home, talks to her hot neighbor, and initiates a kiss with him. Because she is unarguably hot too, her neighbor kisses her back, but only for several seconds as he feels guilty cheating on his wife.

The two decide to just do their cooking session together. The wife fantasizes again that they are making out in the kitchen while preparing the food and only snaps out of it when he calls her name.

The neighbor sees the photos that the wife took and realizes that it is his own wife who is with her husband. They invite their respective partners together for a double dinner date and reveal to them that they know about their affair. I guess both couples separate after that and the wife and her neighbor finally have sex on her couch.