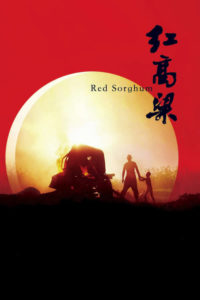 An old leper who owned a remote sorghum winery dies. Jiu'er, the wife bought by the leper, and her lover, identified only as "my Grandpa" by the narrator, take over the winery and set up an idealized quasi-matriarchal community headed by Jiu'er. When the Japanese invaders subject the area to their rule and cut down the sorghum to make way for a road, the community rises up and resists as the sorghum grows anew.

Gong Li plays a young woman sent by her father to marry the leprous owner of a winery. While she is being carried in a carriage by her soon-to-be husband's servants, she takes a liking to one of them.

Gong Li gets married to the leprous winery owner and on their first night, we hear her scream, possibly because she feels disgusted at her husband's disease. We're not sure if their marriage is consummated. Gong Li leaves the winery to go back to her hometown, assisted by her father. While on the way, a masked man ambushes her and forcibly brings her to the middle of the sorghum field. She resists heavily, but when the man reveals himself as the servant that she took a liking to earlier, she stops screaming and she lets him fuck her in the middle of the field (sex scene not shown).

After her father's prodding, Gong Li returns to her husband in the winery. Her husband is murdered just a few days later, and the narrator of the movie suspects that it was the servant who fucked Gong Li who did it.