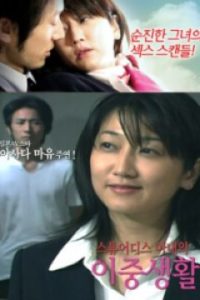 Former flight attendant Ritsuko enjoys lovemaking with her husband who is in the clothing business. But because of his frequent business trips, she gradually becomes bored and sexually frustrated. Her female friend plans to go on a gōkon (group dating) and invites her to come along. Ritsuko decides to go with her friend to do something with her time, pretending and telling Oba, her partner at the gokon, that she's single. She and Oba get drunk and they both end up sleeping together in a hotel room. Oba asks her if she can be his official girlfriend. She hesitates, lying to him that she is (still) a flight attendant and therefore has little time for a relationship. After that, they communicate via email and Ritsuko has fun coordinating with Oba, so she agrees to meet him again. He picks her up at the airport, with her wearing her old stewardess uniform pretending that she just landed from a flight. They have sex at a hotel, and they also meet a few times again after that.

Oba has a fiancee, who begins suspecting that he is cheating on her. She spies on him and eventually finds out about Ritsuko. She confronts Ritsuko and Oba at his place. Ritsuko makes Oba choose between her and his fiancee. Oba did not hesitate to choose Ritsuko, and so, they continue having their secret affair...